Each of my days with the grizzly bears in Khutzeymateen Provincial Park, British Columbia, was unique. Each day held its own mysteries and revealed its own surprises.

On board the zodiac in the early morning hours, we puttered up to a spot where a creek comes out to the inlet, and discovered a mom with her three cubs! 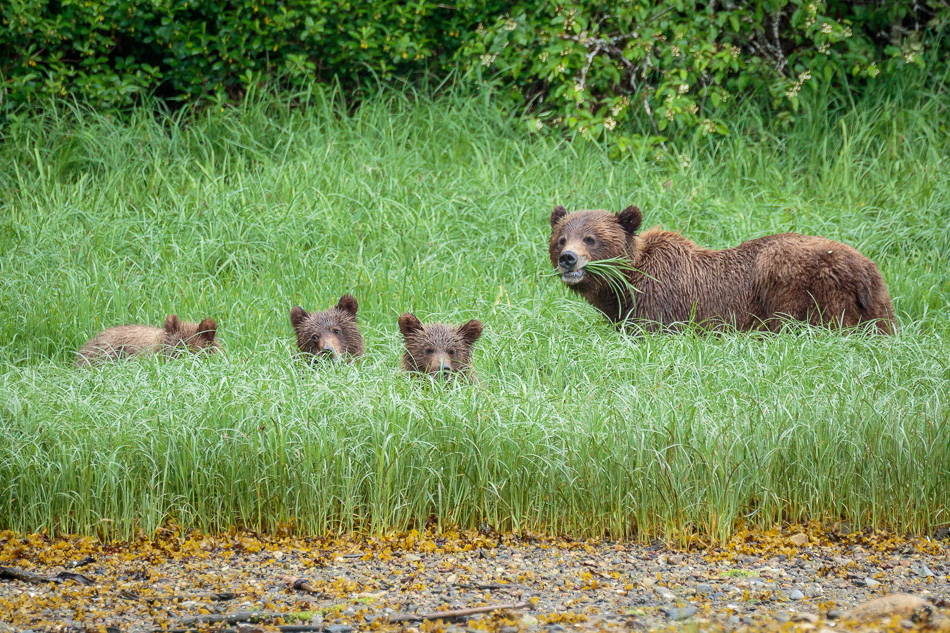 They were just hanging around eating grass as usual. But then the first surprise of the day came when she brought her cubs down to the beach near to us.

Obviously she saw us. And she purposefully brought her cubs towards us! Amazing. 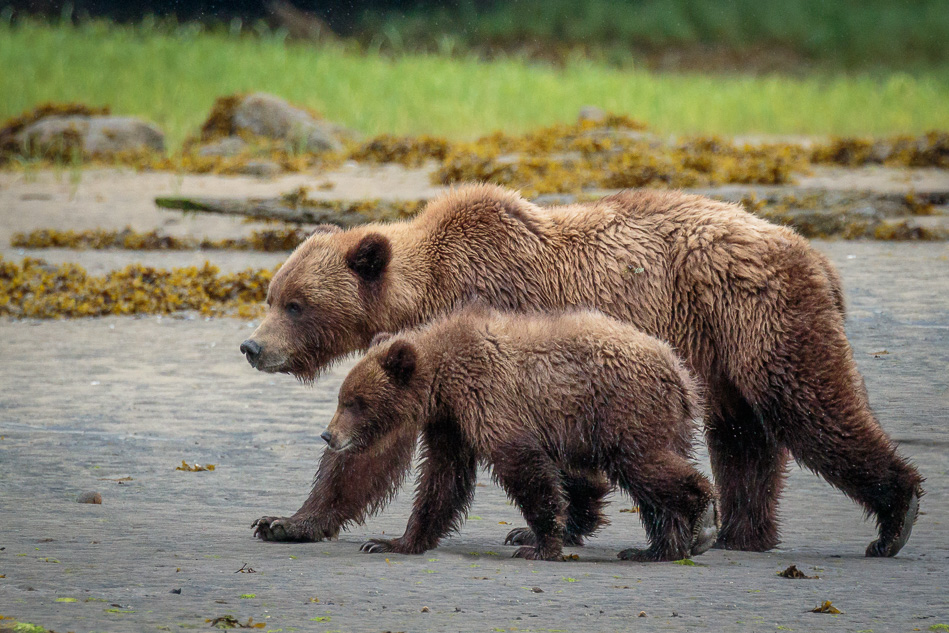 I mentioned in an earlier post about how the bears are different here. Since the area has been a grizzly bear sanctuary for 23 years, the bears do not see humans as a threat. Still, I thought the mother bear would be concerned about our presence when she had cubs. Everyone always says you have to watch out for a bear with cubs. 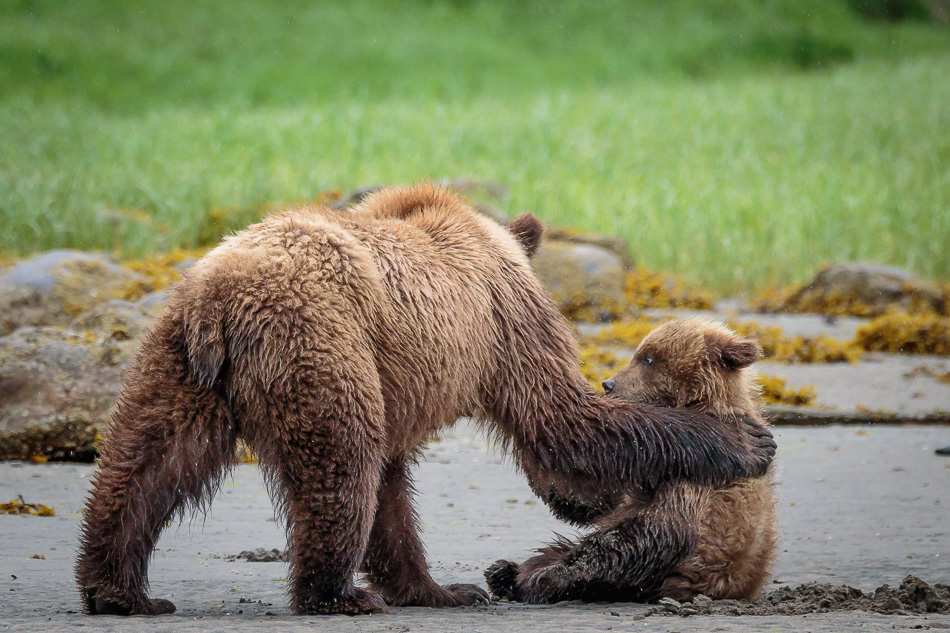 But she wasn’t concerned about us one bit! Even when her cubs got pretty close to us – when we were closer to the cubs than she was – she didn’t seem the least bit worried about it.

I guess that’s what happens when a human has never once bothered your cubs. 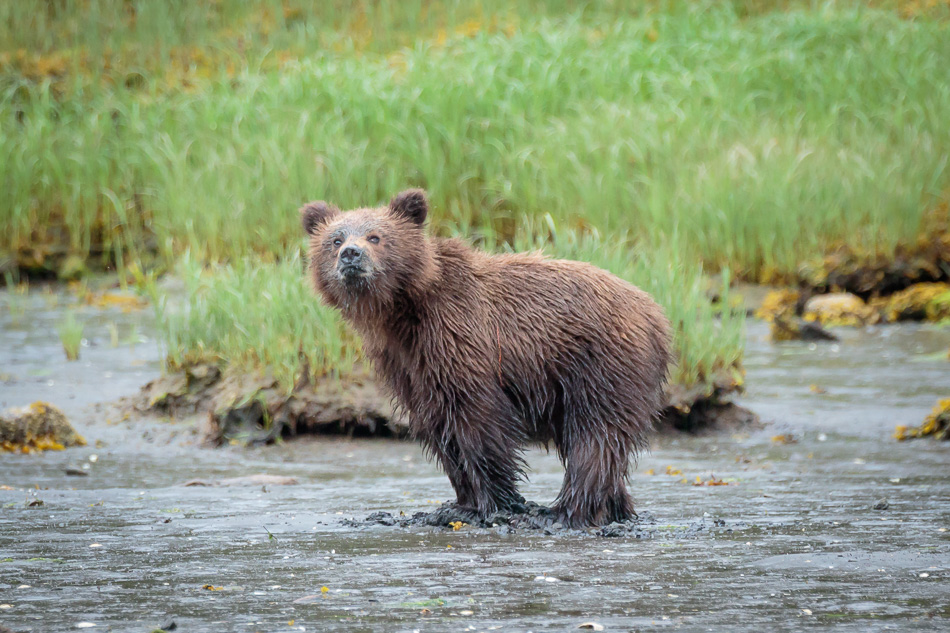 The second surprise came when watching her teach her cubs to clam. The grizzlies are so large and powerful – even the cubs – I was expecting them to just chomp down a clam – shell and all. But that’s not how it works.

After digging up the clam, they ever so gently use those giant claws, placing a claw between the shells, and then TING! it pops open and the bear sucks up the juicy meat. 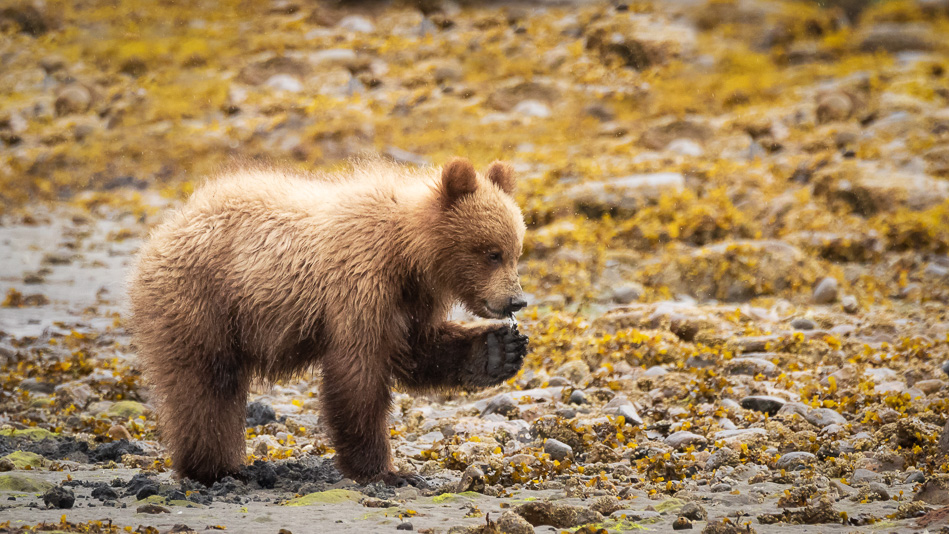 The final surprise was not the bears, but the bravery of a raven! I never would have guessed that a raven could be so brazen. Brazen raven! And yes, it did go in and steal a clam! I think it was just getting any left-overs that might have been missed. But it was so strange, and at the same time heartwarming, to see wild animals coexist so peacefully. 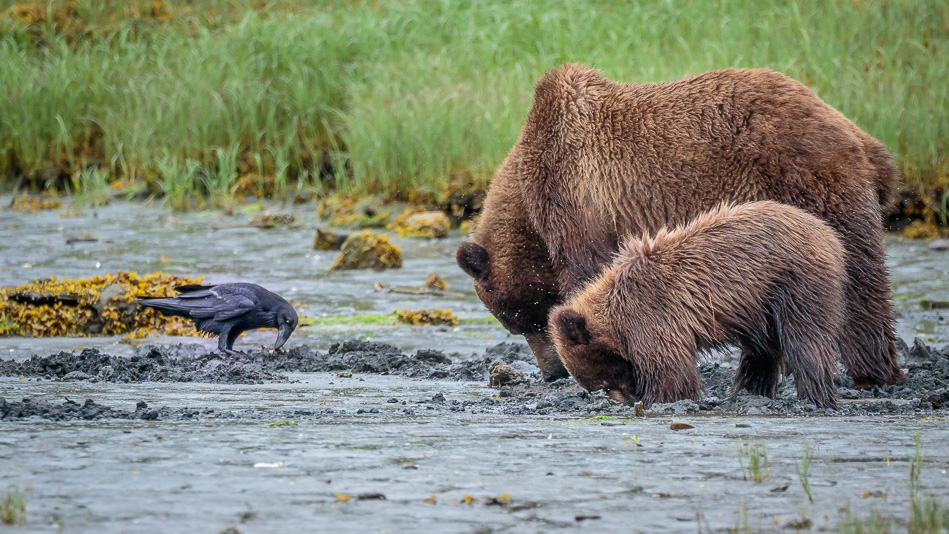 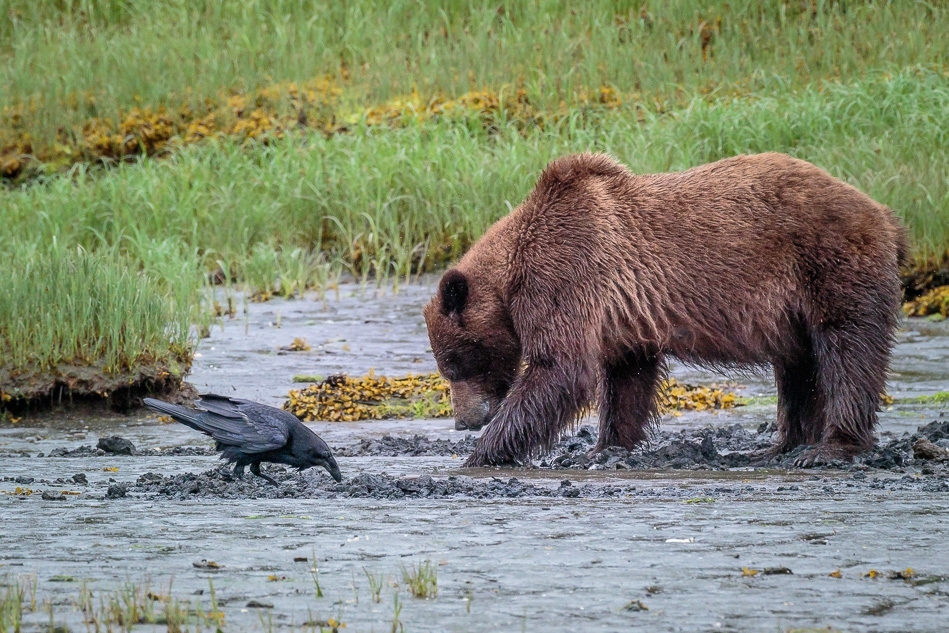 I love this stare down of the raven and a bear cub!

After breakfast mom rounded up the cubs and they went back to the grasses for a little salad before retreating back into the forest. 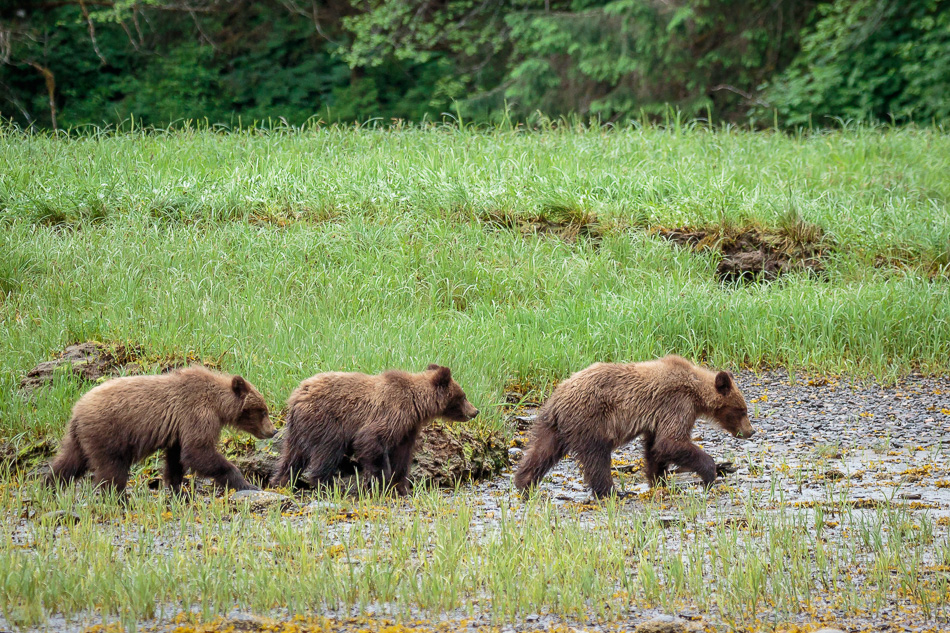 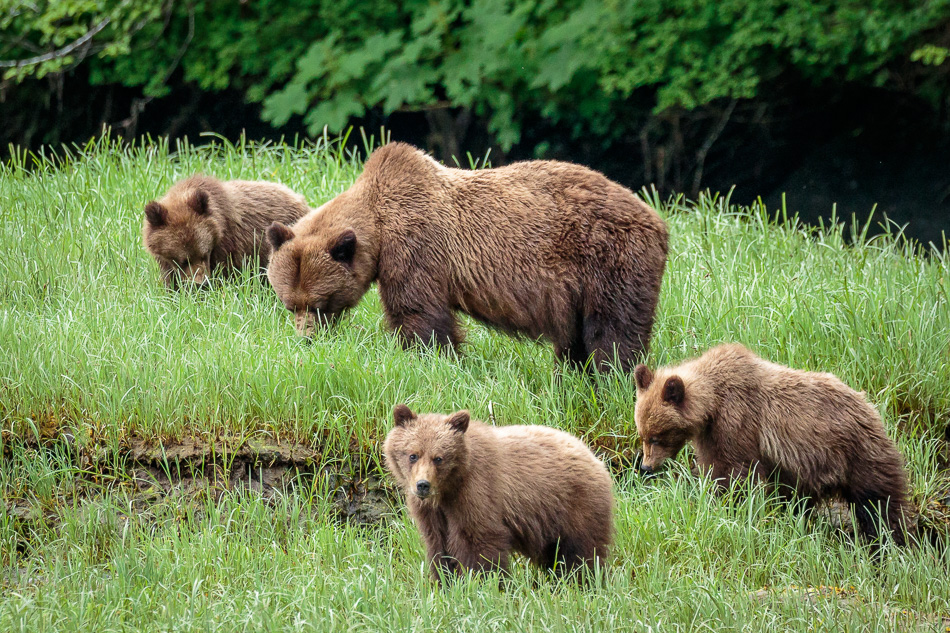 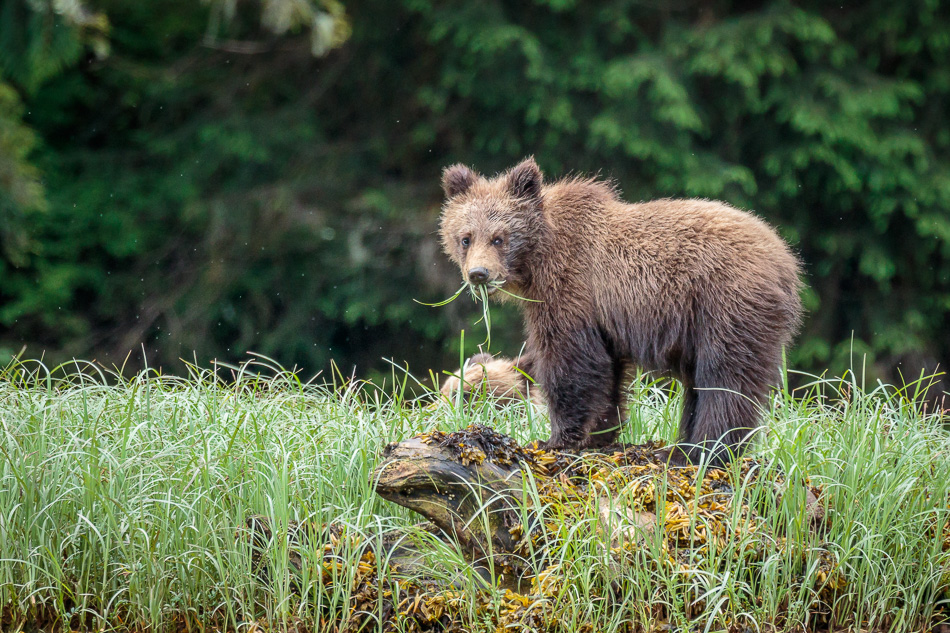 Then it was time for us to retreat back to our mothership for our own breakfast, having already been filled with an exhilarating and awe-inspiring experience for the day.