Last winter I returned to one of my all time favourite bird photography destinations: Cibola National Wildlife Refuge which is on the border between California and Arizona. 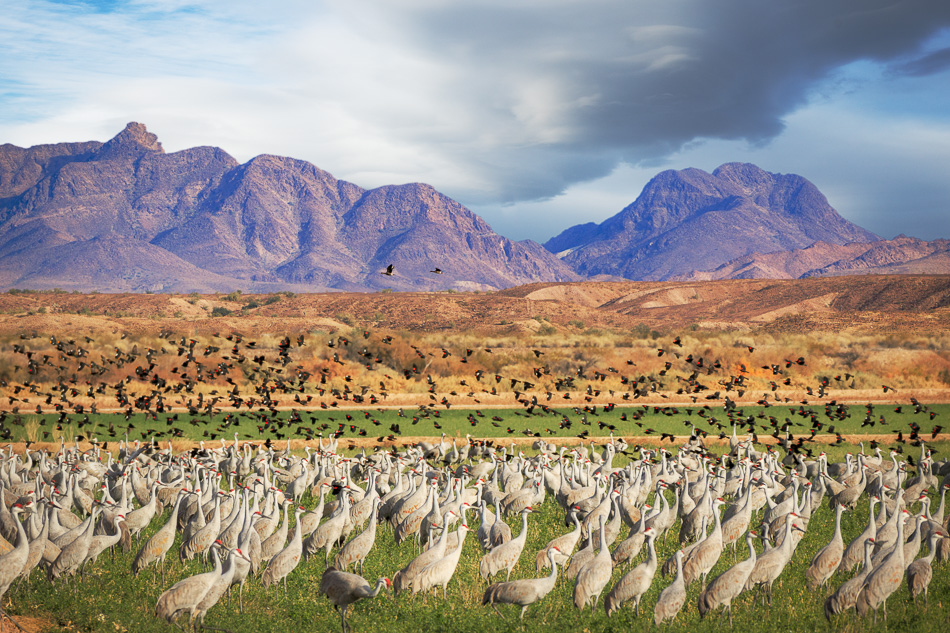 During my first visit to Cibola the previous year, I discovered some problems with my wildlife photography gear, which resulted in my not getting any long lens photos. Bummer! That was one reason why a return trip was on my agenda this year.

But even now that I’ve experienced it twice, the location is so phenomenal that I’ll probably visit again and again. 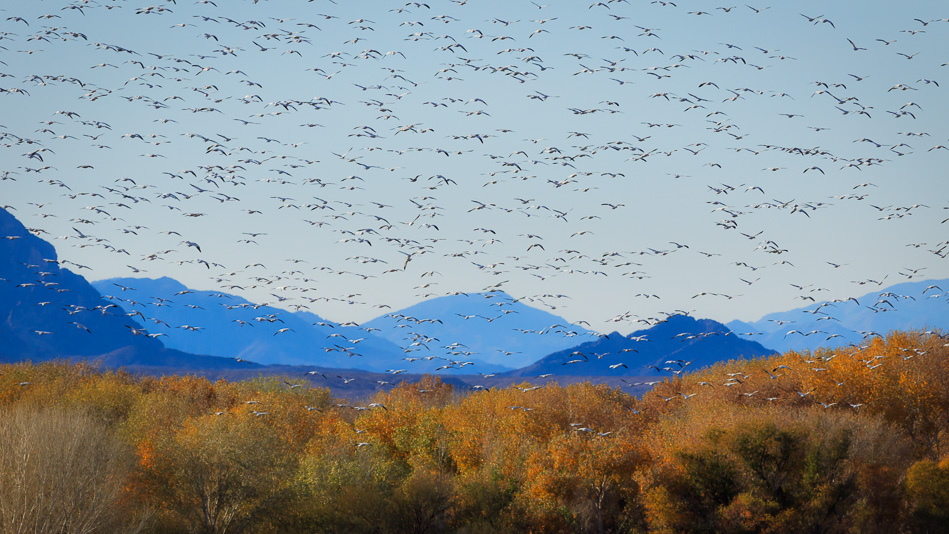 One thing I learned during the first visit was the value of the short lens when it comes to photographing birds. Now I have a new appreciation for the gear that would not normally leave my bag on a wildlife trip. It changed my whole approach to bird photography!

When photographing birds, most people put on their longest lens, try to get as close as possible, and fill the frame. Those kinds of photos are important, of course, but there are many other types of photos to be made that all come together to tell a story about the birds and their location. 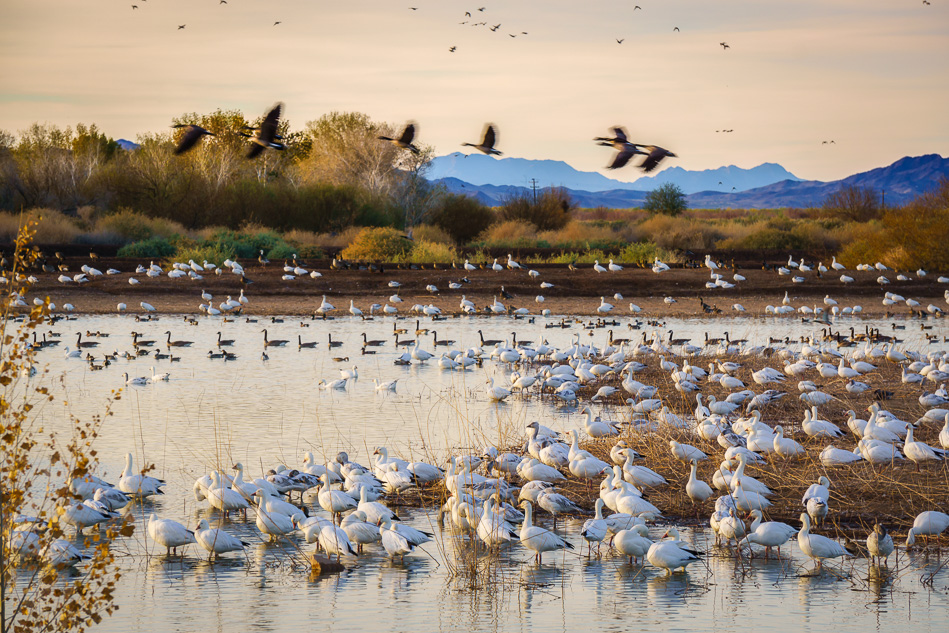 So here is my new approach to bird photography:

1. Soak up the experience and capture the context

I believe this first step is critical if you want to make dramatic images that convey a feeling for both the birds and the location. This is the part that happens while the camera is still in the bag. It can even happen on a white sky day or when the light is dull.

You just watch. Sometimes I’ll spend an hour doing this, sometimes much longer. If the light isn’t good, I might spend days doing this. But it is always time well invested. 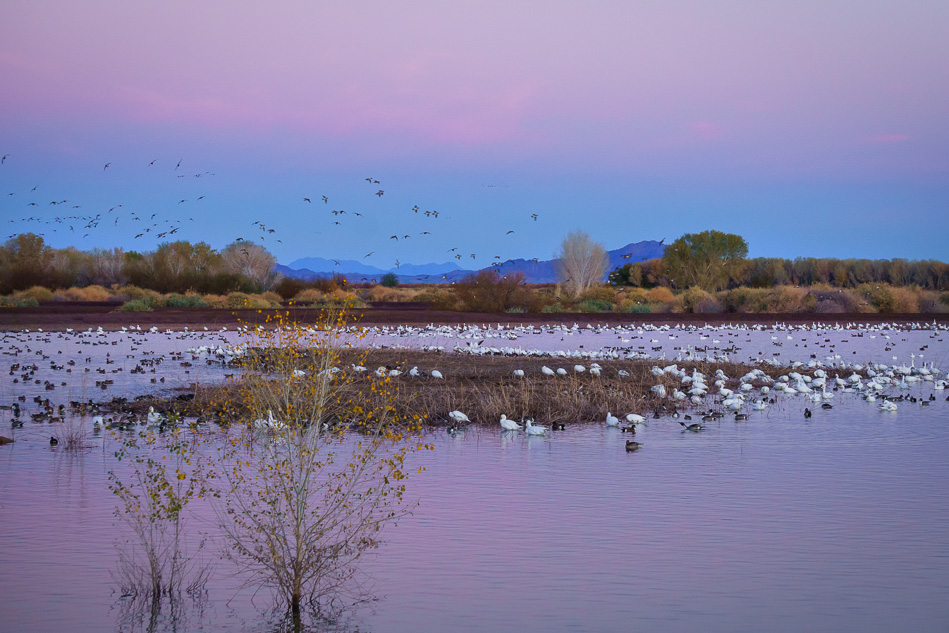 At Cibola, I learned that I could predict the timing of the great launch, when thousands of birds take to the air at the exact same moment, by listening to the sounds the birds make. Once I recognized the sounds, I had a 10 minute warning, which was just enough to make sure I was in one of my favourite spots at the exact right moment.

Don’t forget about the background. If there is a particularly pretty stand of trees, watch and see what time of day the light hits the trees. 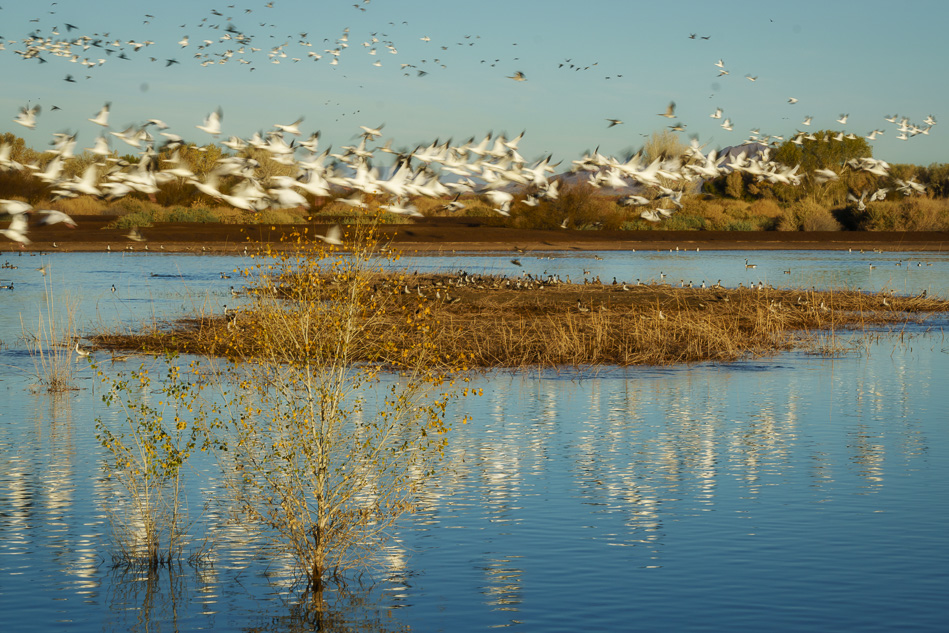 It takes a lot of things to come together to make a dramatic image with impact. But you have to know what those things are first. Otherwise you won’t recognize the 10 minute warning that happens 10 minutes before the light hits the trees. 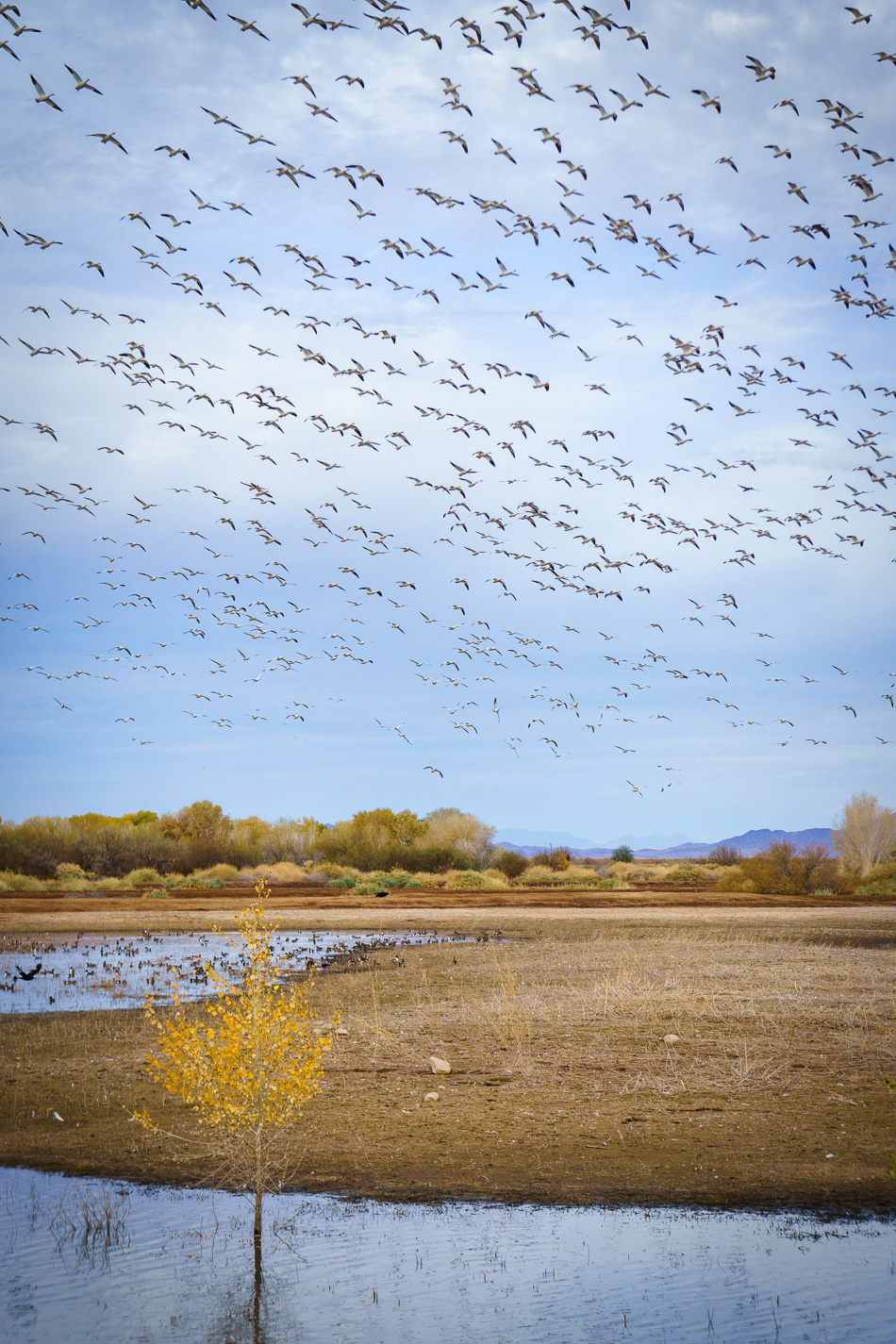 One thing you can do while soaking up the experience is make photos that set the context using a relatively wide angle lens. These are pretty much landscape photos that have the birds as a foreground element. These are the photos I would often forget to make because I was so focussed on getting close-ups with my long lens. Now I appreciate how important these photos are to conveying the feeling of a place. 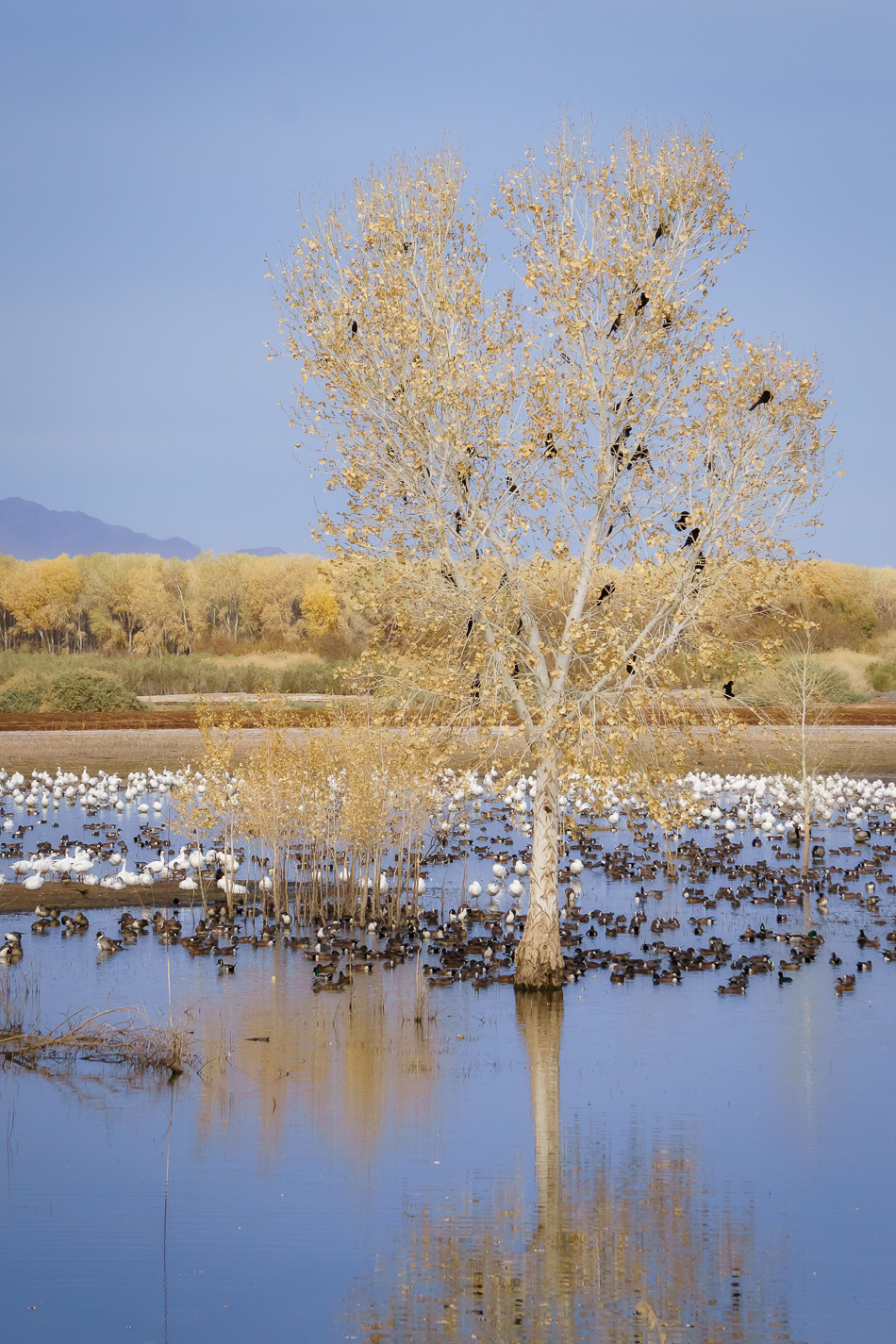 2. Capture intimate details and drama in the environment

With either a medium or long lens, depending on how far away the subject is, try to capture some intimate details of birds in their environment. 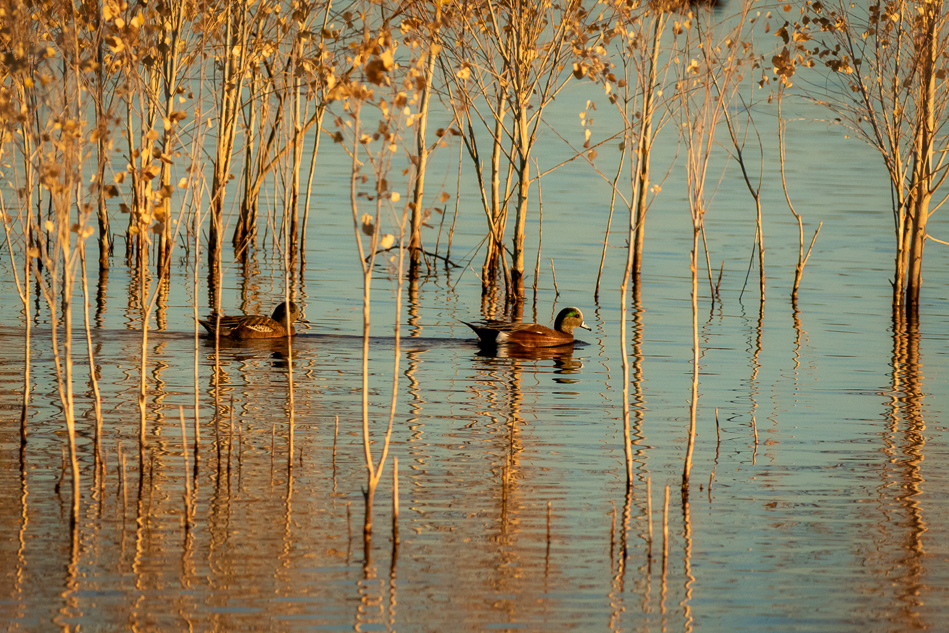 The principle is the same as capturing intimate details in a landscape. It’s just a portion of the scene where something in particular has caught your eye. But it’s not just a close-up of a bird. It contains some context so it has both the bird as a main subject and the location as a secondary subject. 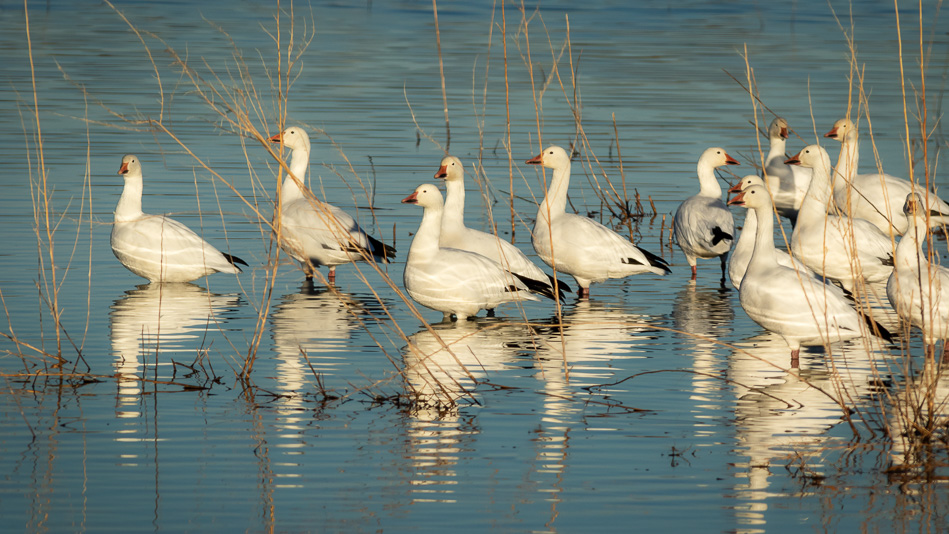 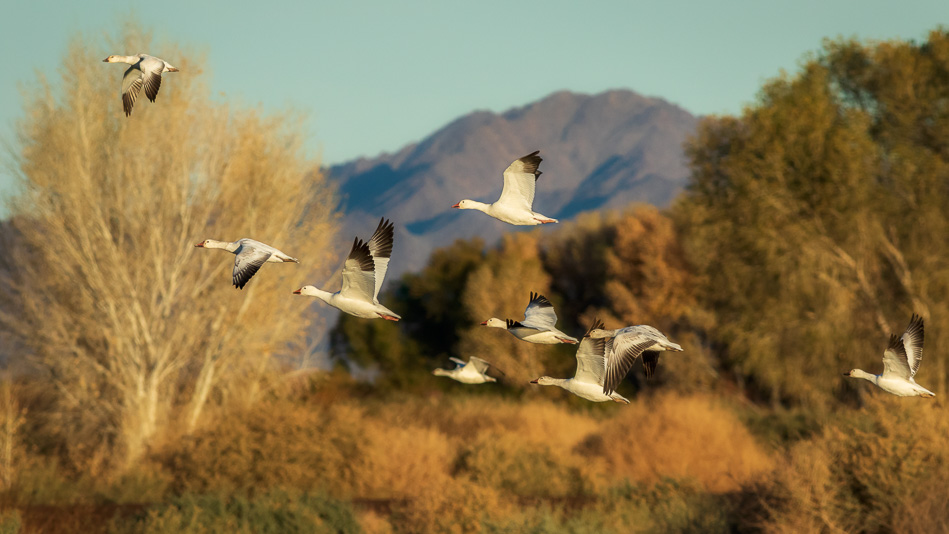 Once you’ve had time to observe and learn to predict the magic moments, you can put on that long lens and try to capture some unique bird behaviour. When it comes to birds in flight, I like to look for patterns or a few birds flying together in an interesting way. 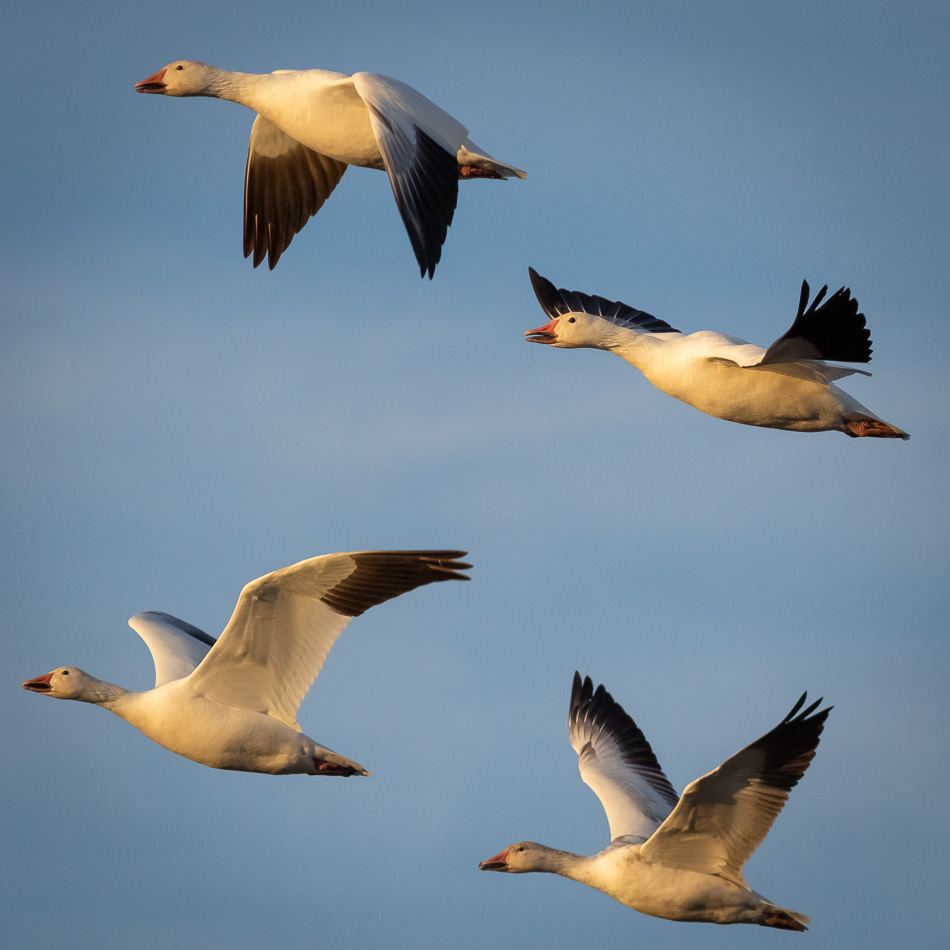 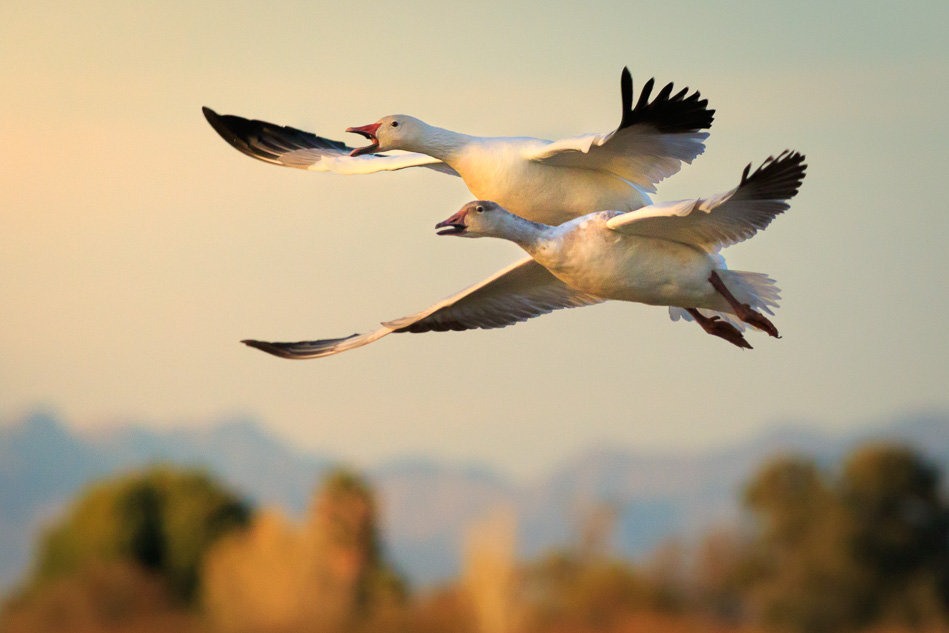 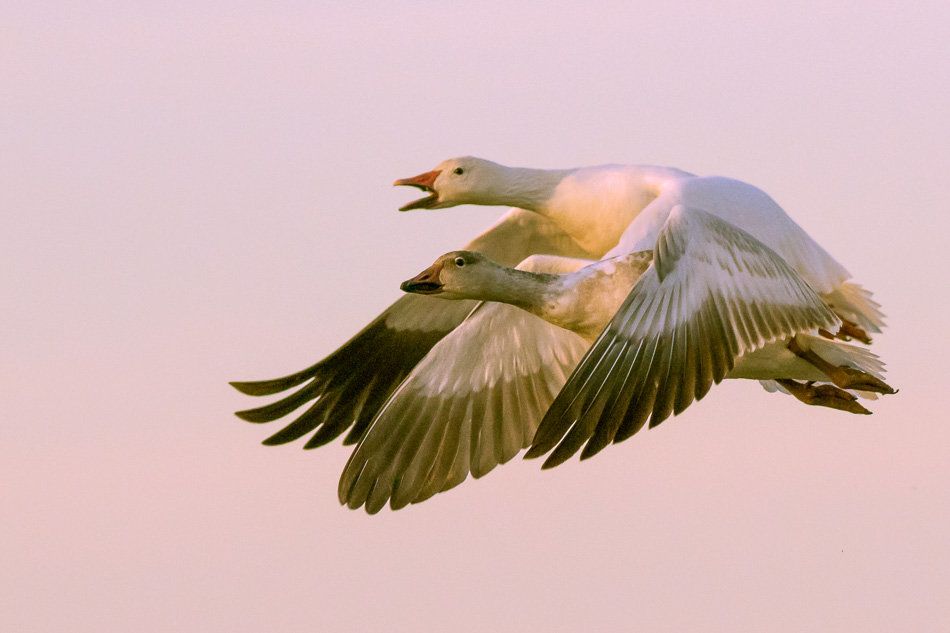 Usually these kinds of traditional close-up images are made with a wide aperture to blur the background, which ultimately removes the context. The bird could be anywhere. But it also creates dramatic images where all the attention is focussed on the bird.

Another type of image I really wanted to capture during my visit to Cibola was the immense density of birds in the air at the same time. Most of time I used my longest lens for this, but the first image below uses a medium length lens. 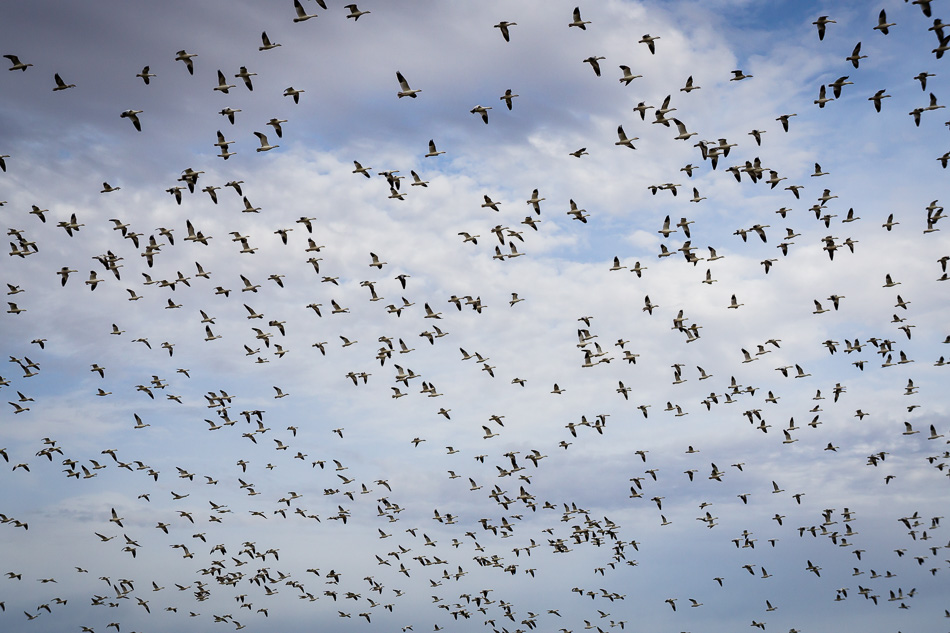 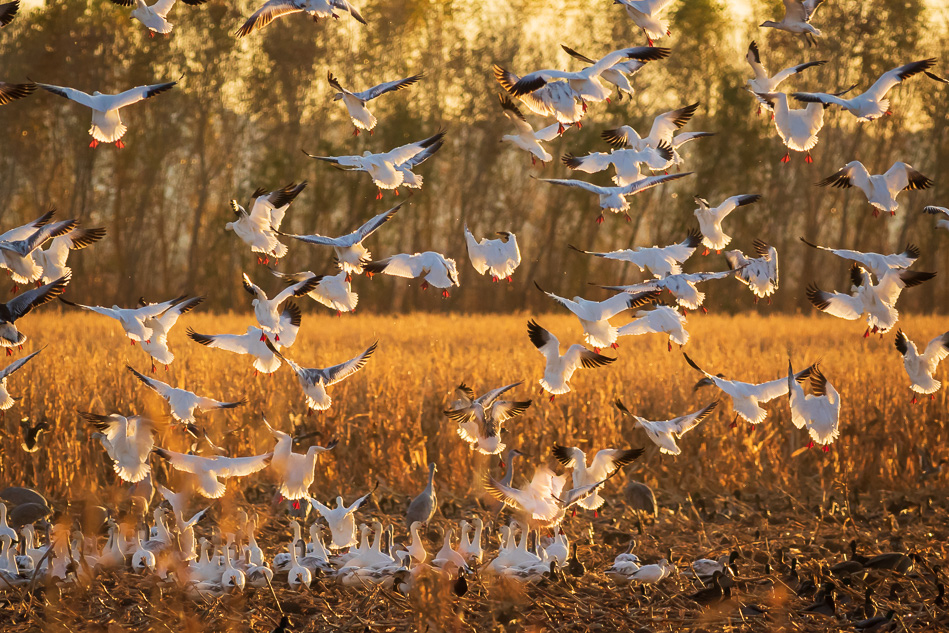 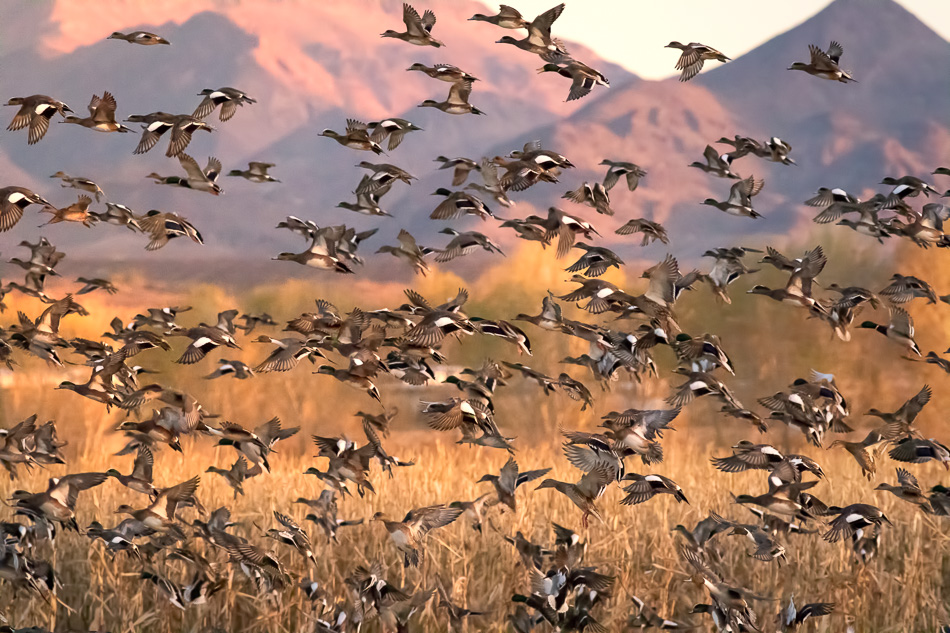 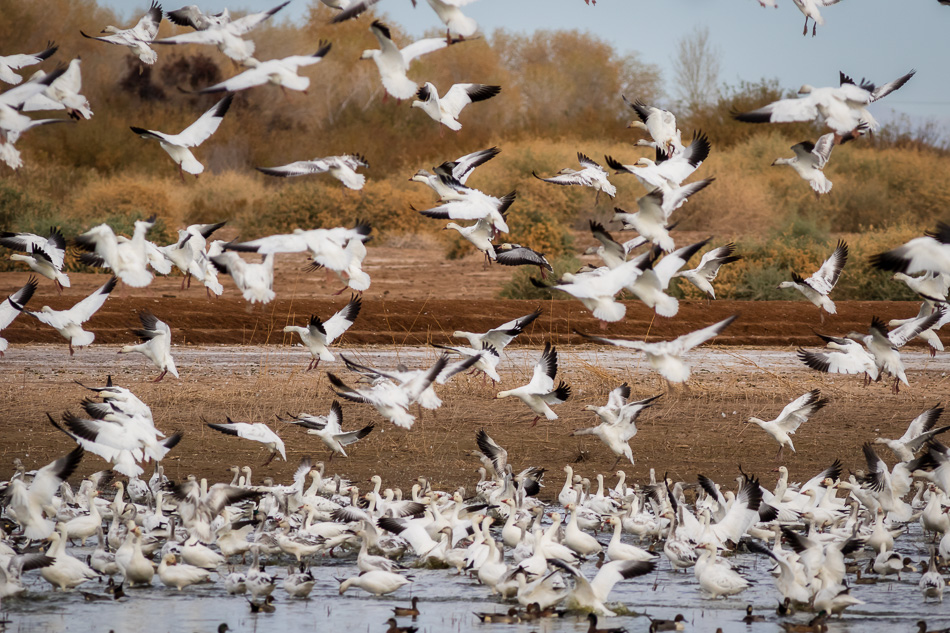 Check out the last goose in the photo below. It’s a Blue Goose!! I didn’t even know I had it, or what a blue goose was, until I was processing the photos. 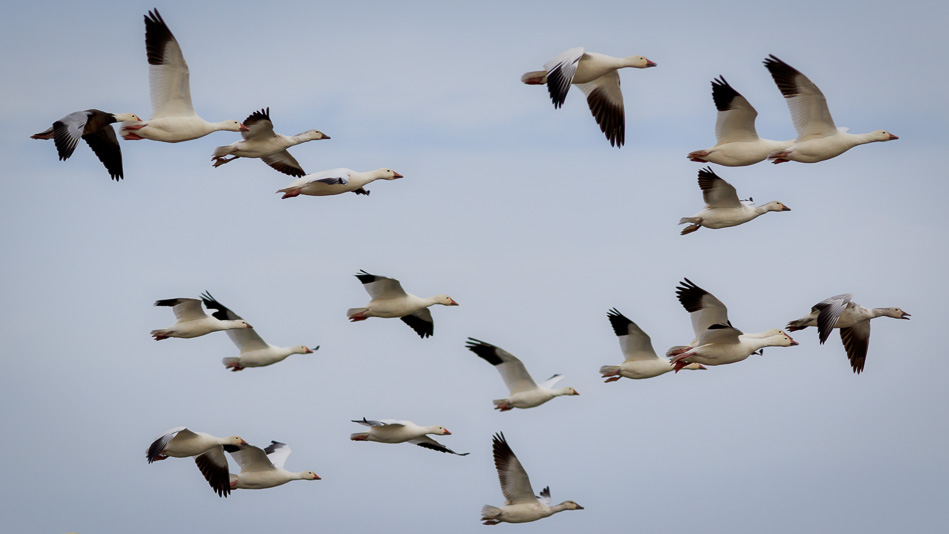 The American Southwest is an outstanding part of the world for bird photography! Migrating birds need wetlands to rest during their journey and these wetlands often provide a density of birds that you will not find elsewhere.

In addition to Cibola NWR, my other favourite locations for bird photography in the American Southwest include Whitewater Draw and Salton Sea.

Do you have any recommendations for good bird photography locations in the American Southwest? I am always on the lookout for new locations, so if you know of any please let me know in the comments below and I’ll add them to my wish list for next season, which is coming up in a month now!

The Lenses I Use for Bird Photography

During this trip, I did use my longest lens the most because that is what I missed during the first visit when my Canon camera broke. So most of the photos in this post were made with a longer lens. But there are plenty of short lens photos in the first post.

When it comes to the short lens, instead of changing lenses on my Canon camera, I often find it easier to just bring along my Sony mirrorless camera so I can quickly switch. I made the short lens photos in this post with the Sony 18-55 lens, but they don’t make that one anymore. Since then I have replaced it with the Sony 16-70mm Zeiss lens which is a thing of beauty.

If you are looking for tips and techniques for photographing birds, including recommended camera settings, see my full tutorial on How to Photograph Birds.