Photography is a waiting game. A physically demanding waiting game too. Standing in one place, essentially sitting on a scene, waiting for magic light, or waiting for an animal to appear, makes your body stiffen up and leaves plenty of room for your mind to create doubt.

In the Great Bear Rainforest, on the coast of British Columbia, I stood at the edge of a river in the freezing cold and began to wonder. Maybe I don’t deserve to see the spirit bear? 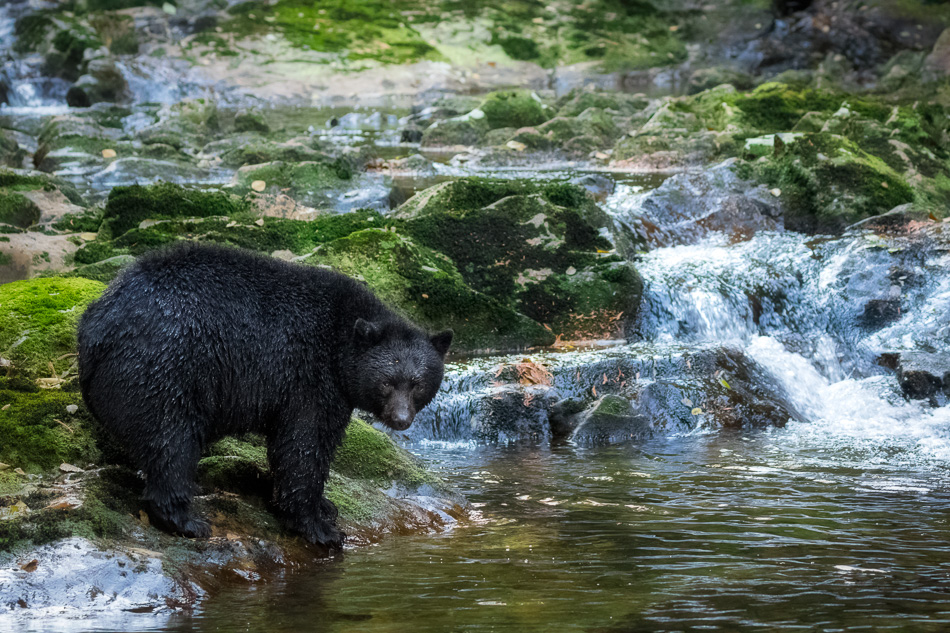 I travelled to this remote wilderness destination in the hopes of seeing and photographing the elusive Kermode Bear. Also known as “Spirit Bear” it is a black bear with a recessive gene that causes its fur to be white. It is extremely rare. And it only happens in this particular place. 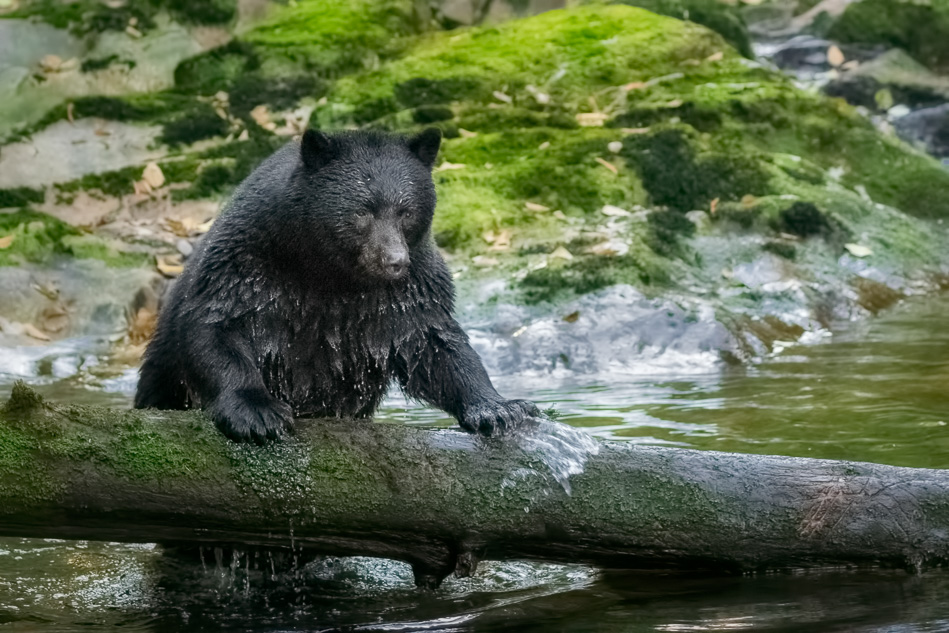 My body hurt. It was a tough climb for me to get to the spot. With two bear guides and a handful of fellow photographers, we made our way upstream climbing over roots and logs beside the river. It wasn’t a long hike, but some of the “root scrambling” was straight up 6 feet with small footholds. That part might have been easier than the waiting.

Maybe I’m not cut out for this. 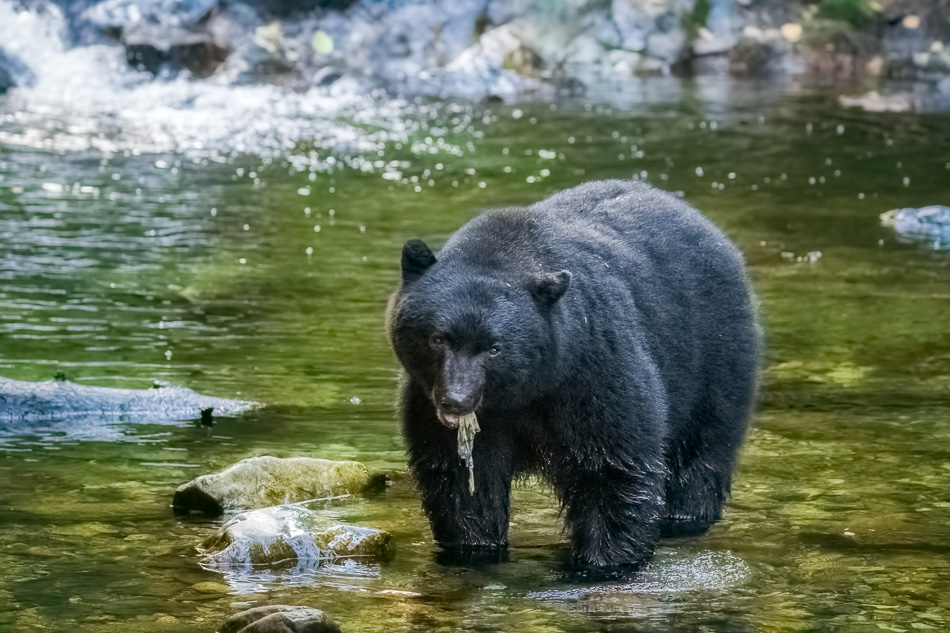 On the third day of waiting, I groaned while changing from a sitting to standing position and said to the photographer next to me, “I think I’m too much of a weakling for this.”

He looked at me with a slightly astonished look on his face and said “I just saw you,” (and I thought uh oh), “… stand in a freezing cold river for 20 hours – that is not a weakling!”

I’m not sure if it was stamina or stubbornness, but I waited, hoping my patience would pay off. 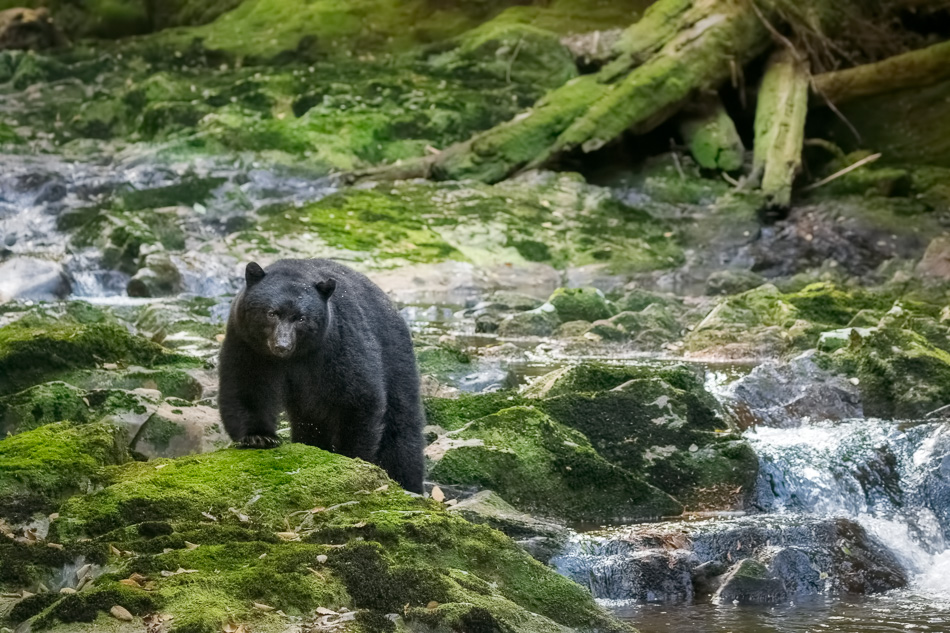 Finally, after standing there for 20 hours over 3 days, a black bear came out of the woods on the opposite side of the river. As instructed, we all stayed put – no sudden movements. He came directly towards us and the most incredible thing happened.

He looked at me. Directly at me.

He looked at every single one of us in turn, appearing to judge us each individually as to whether we were a threat or not. When he got to the end of the line of photographers, he decided. 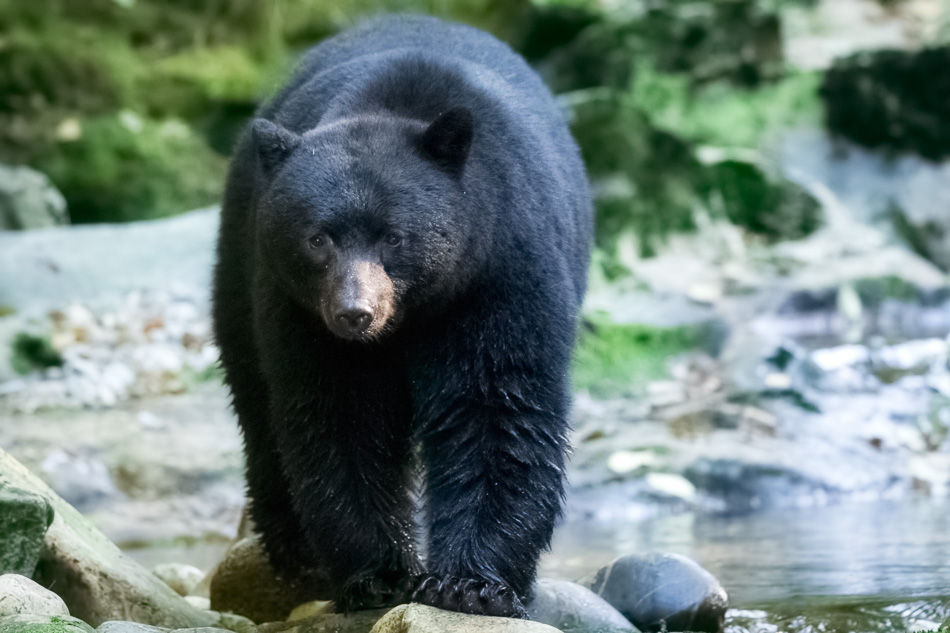 On the fourth and final day, the black bear was at the same fishing hole when we arrived in the morning. We were visited by a couple of different black bears that day.

I love how they like to find a small rock or log that allows them to get all their feet out of the water, they watch and wait for a fish, and then pounce. 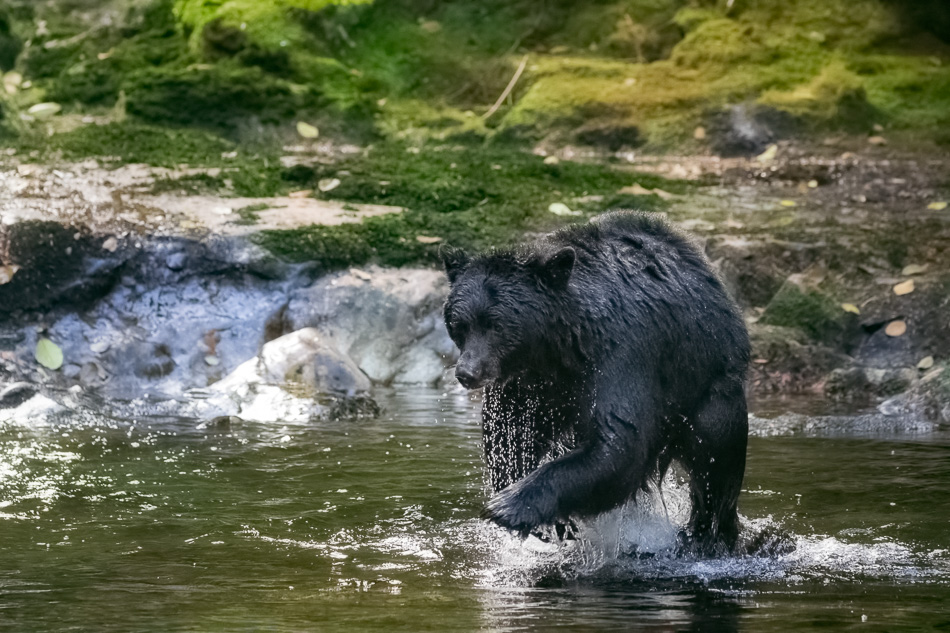 One of the bears had a little route he went on over and over again. From the river he would walk behind a large boulder, get up on the boulder, get down off the boulder, walk up a log, across the stream and back to the starting place. On this route, I saw him catch 5 fish! 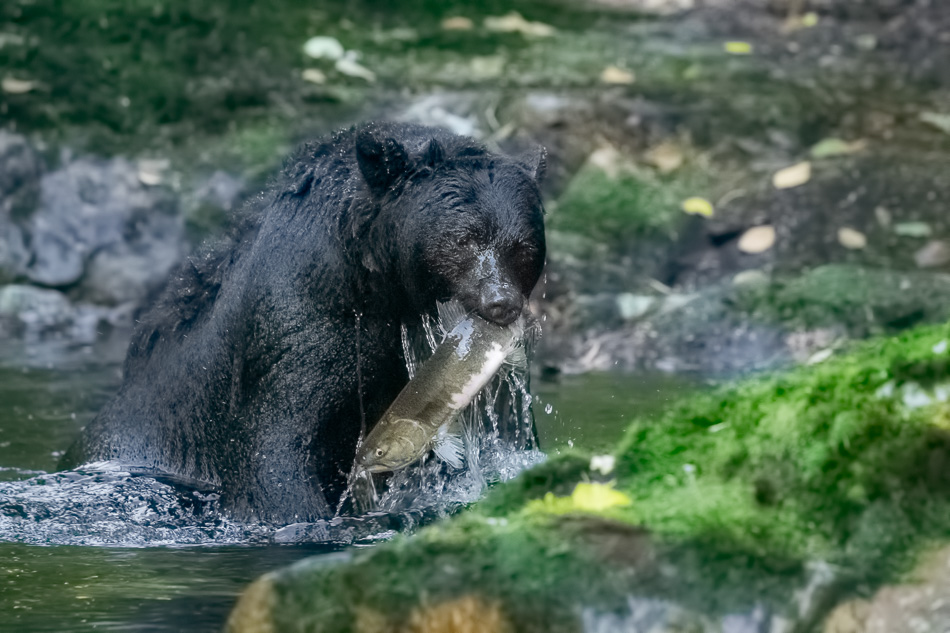 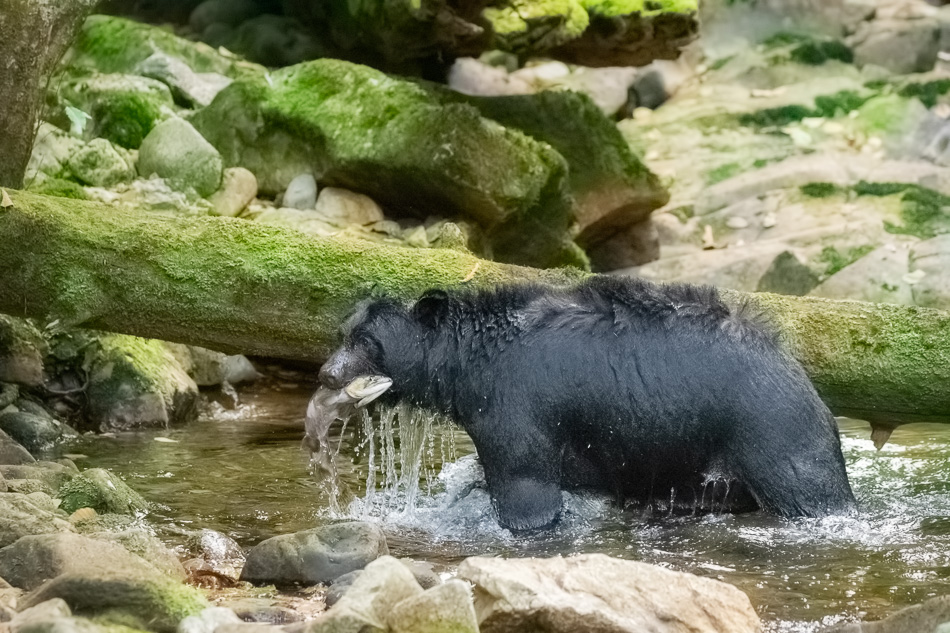 He had done the route so many times it was unexpected when he broke the pattern and started walking directly towards me. I was sitting on a large rock at the time and instinctively felt that standing, in order to back away, would be too much movement. I quickly looked at the guide to see if I was going to get instructions to move, but he said to stay while moving closer to me. 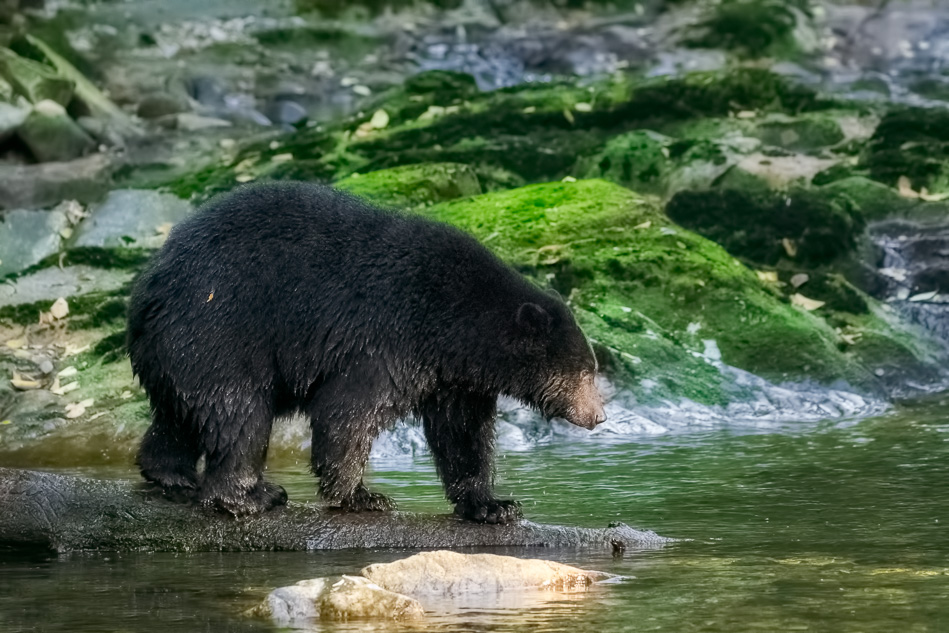 The bear walked right past me no more than 15 feet away. He was too close for me to photograph so I just watched in awe and soaked up the experience. I wasn’t scared at all. We had already established that we were not a threat to each other. He didn’t even look at me.

As the end of the day drew near, I began to accept it.

No spirit bear. I didn’t get the shots I came for. 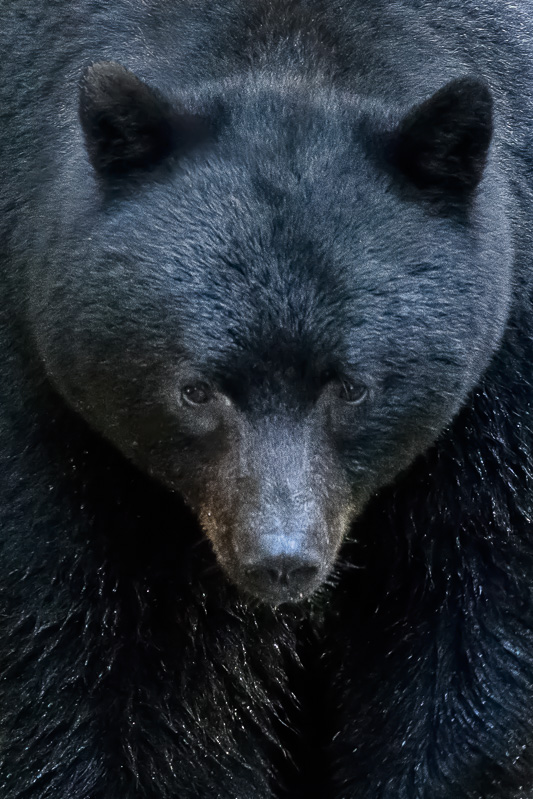 I did a lot of planning and preparation before embarking on the trip. I had all the essential rain gear, new rain boots, I rented the camera equipment I needed, I had a shot list – I was prepared. But once I am on a trip, whatever will be, will be. I try to remember that. All I can do is make the best of whatever mother nature has in store for me. And try my best to keep my brain in check. 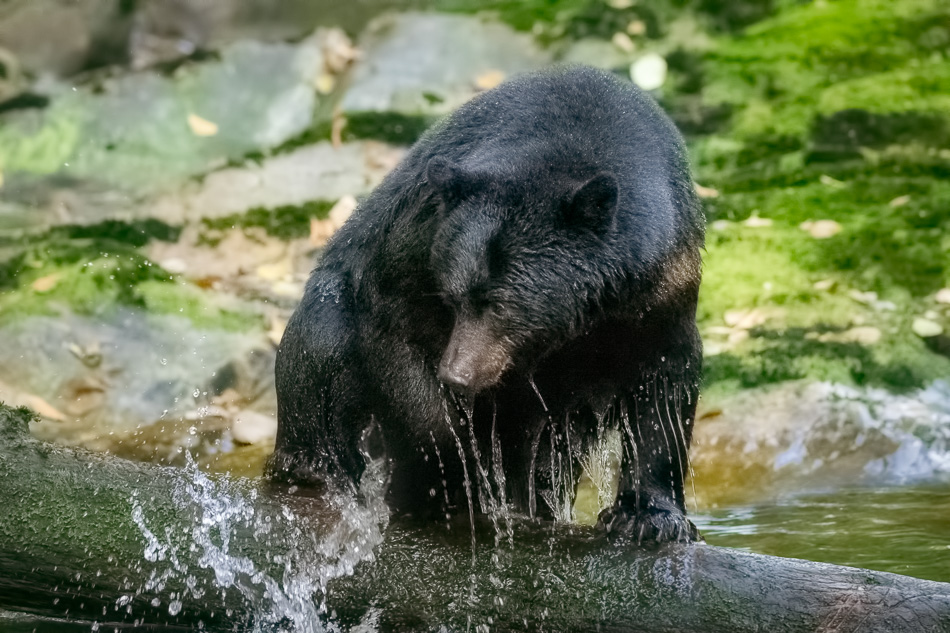 I was in one of the most beautiful and serene places I have ever been. I worked hard to get there. Spirit bear or no spirit bear, I am so lucky to have had this experience.

Returning to the lodge on the evening of the last day, Marvin, our host summed it up perfectly. “Black bears matter too.” 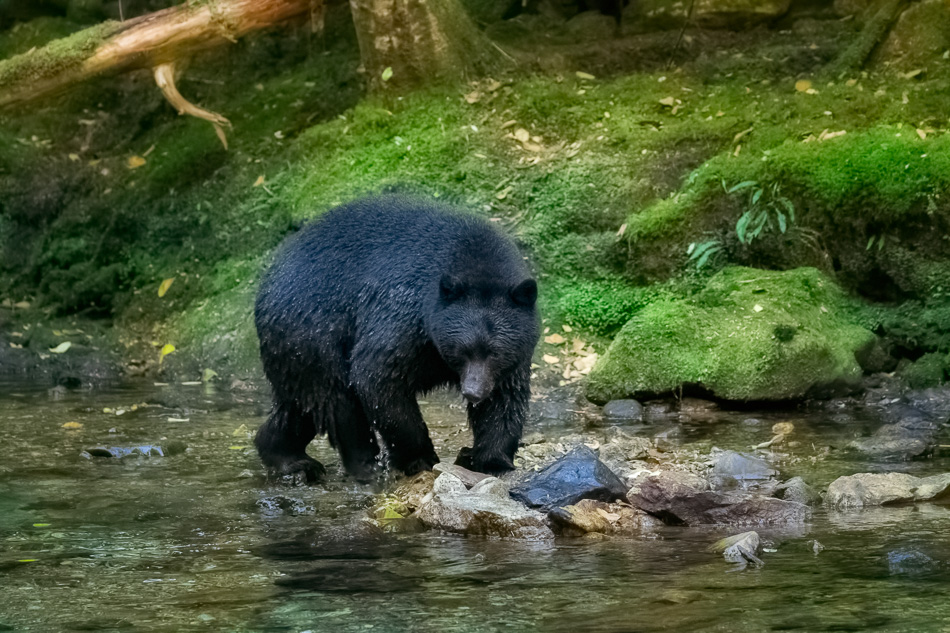 A note on the gear

On this trip I was using outrageously high ISO’s and dangerously low shutter speeds. Fortunately the black bears didn’t move very fast and I was able to wait for those moments when the bear paused to take my shots.

Of course exposing for a black bear in a low light situation was much more difficult than a white bear would have been. I should have been prepared for both subjects. Lesson learned!