When it comes to post-processing, my goal is usually to enhance a photo’s best qualities while maintaining a natural look. After all, nature is stunning just as it is!

But sometimes I want to take my images a bit further; I want to go beyond the natural look, maybe add a painterly effect, some texture or colour grading. That’s when I turn to the plugins from Topaz Labs in my post-processing workflow to create a unique style.

Below you’ll find a video demonstration showing how I combine the plugins and other techniques I use to create unique effects with my photos.

My favourite plugins for making these kinds of adjustments are Topaz Impression, Texture Effects, Glow and Restyle. Each one creates different types of effects and has many, even hundreds, of options.

But I rarely just pick a preset and go with it. Most often I use the plugins in conjunction with Photoshop and use layers, layer masks, blend modes and opacity adjustments to define exactly how much of the effect I want and precisely where in the image I want it.

This is the technique I used when I processed these sea anemone photos I made on Cannon Beach, Oregon. With their soft flowing tentacles and bright contrasting colours, they were perfect subjects for adding a few extra special effects to give them a really unique look. 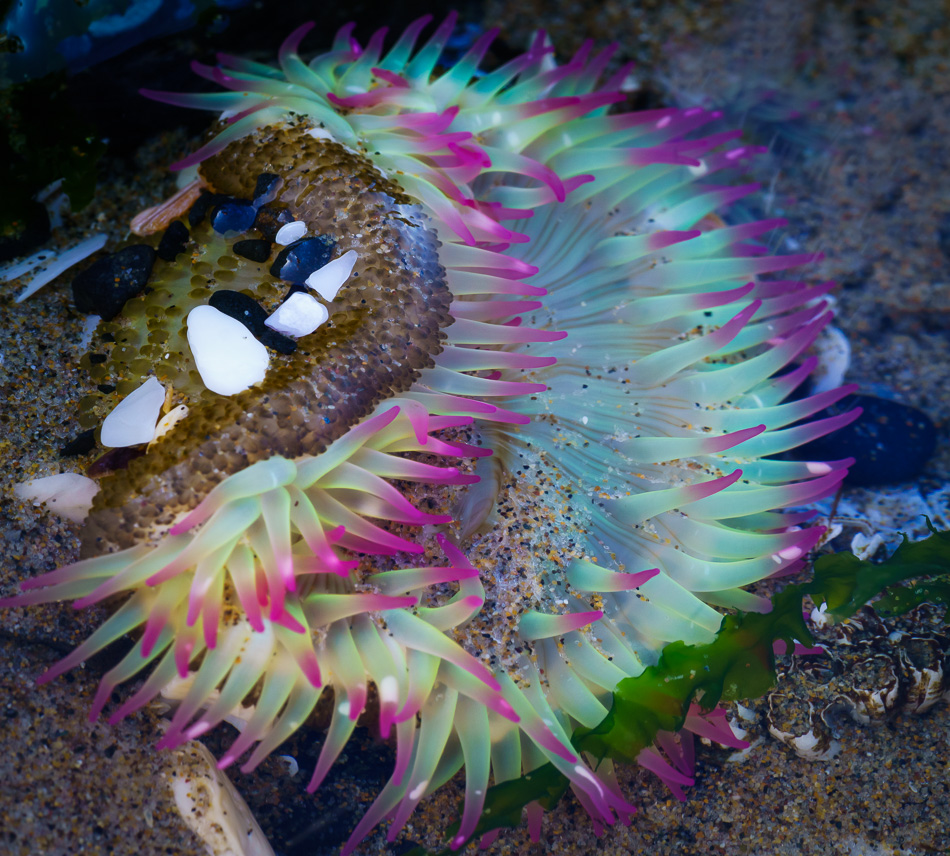 In the photo above, I used Topaz Glow with the effect called “Dizzy”. But I didn’t just apply the effect and call it done. Instead I applied it to a layer in Photoshop, used the Overlay blend mode, reduced the opacity to 55%, and then painted the effect only where I wanted it, which was on the tentacles. 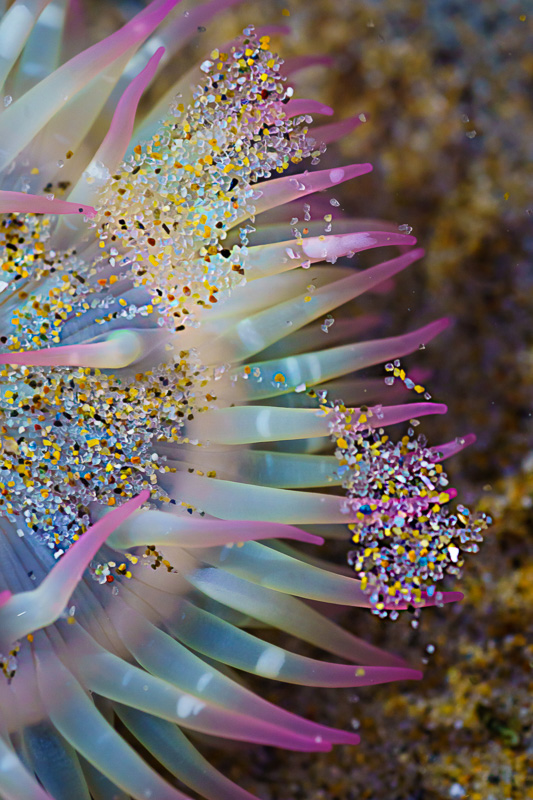 I think the best way to approach post-processing is to use it to bring out the best in a photo, rather than thinking of it as a way to fix something. In the photo above, I loved the way the sand looked floating on the water above the anemone. It was so colourful! For this image I used an effect in Topaz Studio called “Stained Glass” and applied it only to the sand to bring out that quality. 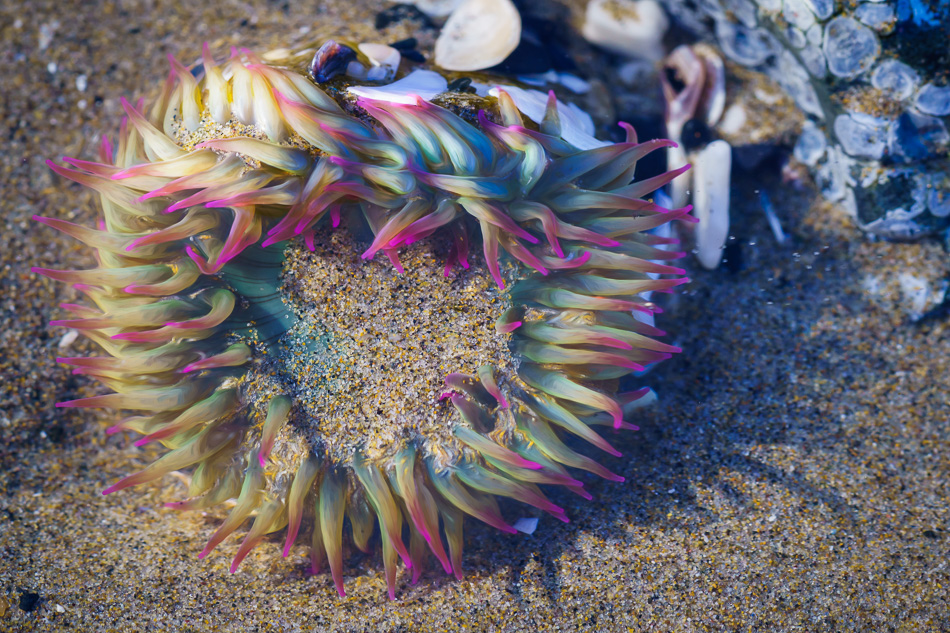 The effect in the photo above is a little less subtle than the previous examples. I used Topaz Impression with a painterly effect called “Van Gogh” to add soft brush strokes and again I only applied the effect to the tentacles. 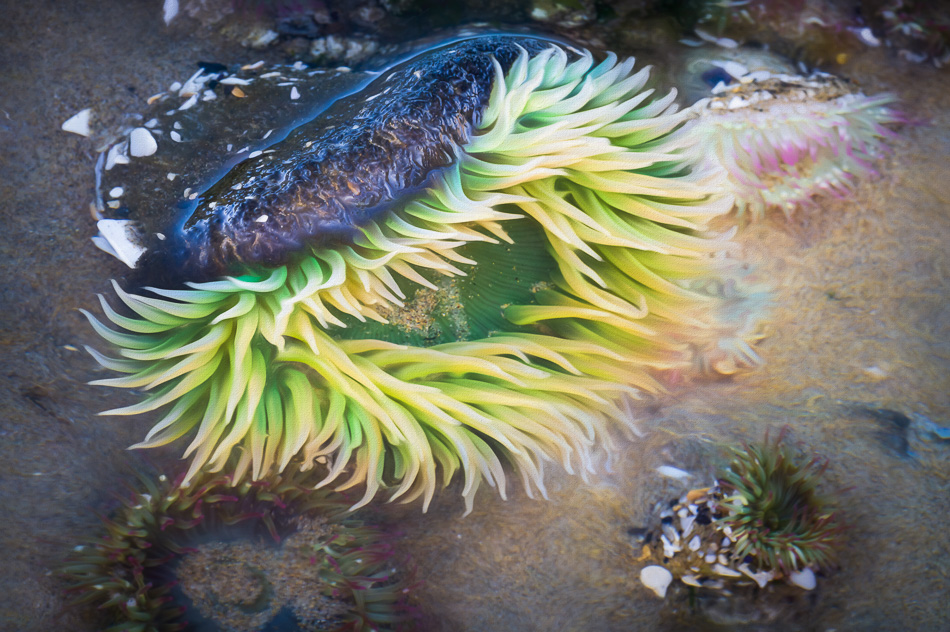 A little less subtle again, for the photo above I used Topaz Impression with an effect called “Georgia O’Keefe”. This time I applied the effect at 80% opacity to virtually the entire image, only removing it a bit on the anemones in the background and the column of the main subject. 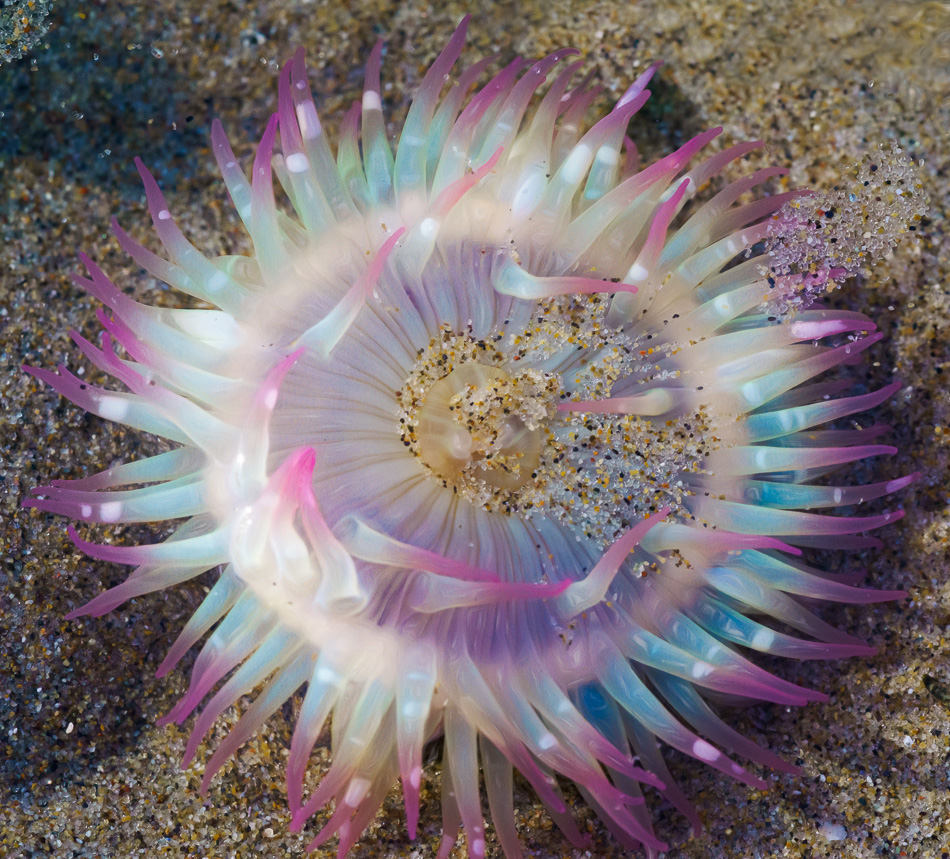 The image above was the most complicated edit since I used Topaz ReMask to make a complex selection allowing me to remove an unwanted rock from behind some of the tentacles. I then used Topaz Impression with an effect called “Liquid Lines” followed by Topaz Texture Effects with an effect called “Lilac Tinge”. I applied both of those effects at a lower opacity and painted on exactly where I wanted it rather than applying it to the whole image.

By combining the various plugins and defining exactly how I want them to be in my images, I can create very unique effects that are not possible simply by picking a preset.

I created this video to share my process with you so you can see exactly how I go about creating these effects.

If you want to try out some of these techniques, I recommend you download the free software called Topaz Studio. It contains some adjustments you can use for free and is also a host program for *some* of the paid plugins. This is a great option if you don’t have any other post-processing software and you are looking for something free to use.

Then you can also get trial versions of the plugins and try them out for 30 days and see if you like them.

But don’t worry about that too much. Just choose the plugins you want to try and they’ll either open as part of Studio or they’ll open on their own, it doesn’t really matter. Either way, you can use them in conjunction with Lightroom, Photoshop, or as stand-alone products.

Click here to get Topaz Studio, trial versions of the plugins, or to purchase plugins.

Use the coupon code MCKINNELL to get 15% off anything in the Topaz Labs store.