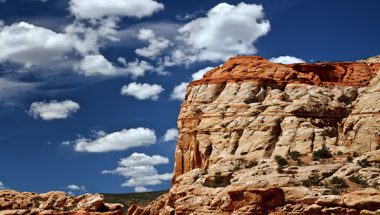 The 100 mile long wrinkle in the earth's crust is called Waterpocket Fold. Early explorers called it an impassable reef which led to it's current name: Capitol Reef National Park. It was created 65 million years ago by the same forces that uplifted the Colorado Plateau. It is a vast collection of cliffs, domes, spires, monoliths, canyons, slickrock, ridges and arches. … END_OF_DOCUMENT_TOKEN_TO_BE_REPLACED 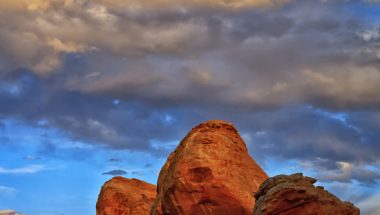 I was treated to a lovely sunset at Capitol Reef National Park in Utah. I really liked how the direct light shone onto the red twin rocks and made them glow. Please click the images to view larger versions. It's hard to tell from this angle why they are called twin rocks. One of the rocks in this grouping looks like two melded together from another point of view. … END_OF_DOCUMENT_TOKEN_TO_BE_REPLACED 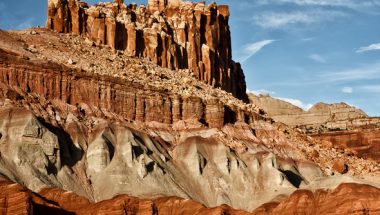 Of all the national parks in Utah, Capitol Reef National Park is the one that seems to get overlooked by many tourists, yet it was one of my favourites. Perhaps that's exactly what I liked about it: fewer people. Please click the image to view a larger version. It is just as rugged and magnificent as all the other parks I visited with its impressive towering cliffs. I … END_OF_DOCUMENT_TOKEN_TO_BE_REPLACED