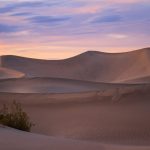 After the series of images I showed you in my last post from Mesquite Sand Dunes in Death Valley National Park, the sun dipped behind the nearby mountains and the colour of the dunes totally changed. The golden glow disappeared as the sky turned pale pink and blue and the dunes began to reflect the soft pastel shades. Please click the images to view larger … END_OF_DOCUMENT_TOKEN_TO_BE_REPLACED

Our last stop on our winter snowbird season in Southwest USA was at the Mesquite Sand Dunes in Death Valley National Park. After visiting Coral Pink Sand Dunes in Utah, White Sands National Monument in New Mexico, and Imperial Sand Dunes in California, I knew I was in for a tough trek on earth that moves underfoot with each step. Please click the images to view larger … END_OF_DOCUMENT_TOKEN_TO_BE_REPLACED 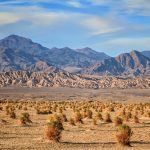 One thing I was not expecting to see in Death Valley was a photogenic weed patch! Just like Devils Golf Course, where only the Devil could play golf, here at Devil's Cornfield, only the Devil could eat this corn! It's not corn at all -- it's arrowweed. I made this image in the early evening just as the light began to soften, but while there was still plenty of light … END_OF_DOCUMENT_TOKEN_TO_BE_REPLACED 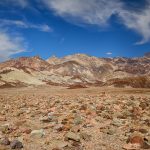 Hazy days made for difficult photography at Death Valley National Park when I first arrived. The air was dense and the clouds and haze obscured most of the grand views. The haze tended to lift around sunset and I got a few good shots at Devils Golf Course and Badwater Basin, but the days were pretty much a write off except for scouting locations. On the fourth day I was … END_OF_DOCUMENT_TOKEN_TO_BE_REPLACED 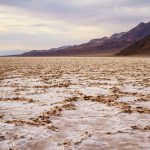 So I'm thinking about getting one of those little mirrorless cameras with the interchangeable lenses like a Sony NEX7 or a Fuji X20. One of those would be perfect for a day like the day I made the photos in this post. I was already feeling sluggish and had a headache coming on and it was super hot -- 90 degrees in March! I remember that I went out for the very short walk at … END_OF_DOCUMENT_TOKEN_TO_BE_REPLACED