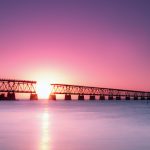 The Bahia Honda State Park in the Florida Keys features a scenic bridge which was originally the overseas rail bridge built in 1912 to connect the Florida Keys to the mainland. Much of the railway was damaged in the 1930's "storm of the century". Too expensive to repair as a rail bridge, it was converted to an overseas highway. Today the bridge is only used by tourists who … END_OF_DOCUMENT_TOKEN_TO_BE_REPLACED