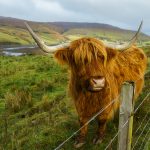 It’s a Highland Cow! But in Scots (which is an actual language and different from Gaelic), they are known as Heilan’ Coo, and that’s what everyone calls them in Scotland. A little tangent about Scots. I’m a little embarrassed to admit that I didn’t know about Scots. I was expecting Gaelic, but I didn’t know there was also Scots. There’s some disagreement about … END_OF_DOCUMENT_TOKEN_TO_BE_REPLACED